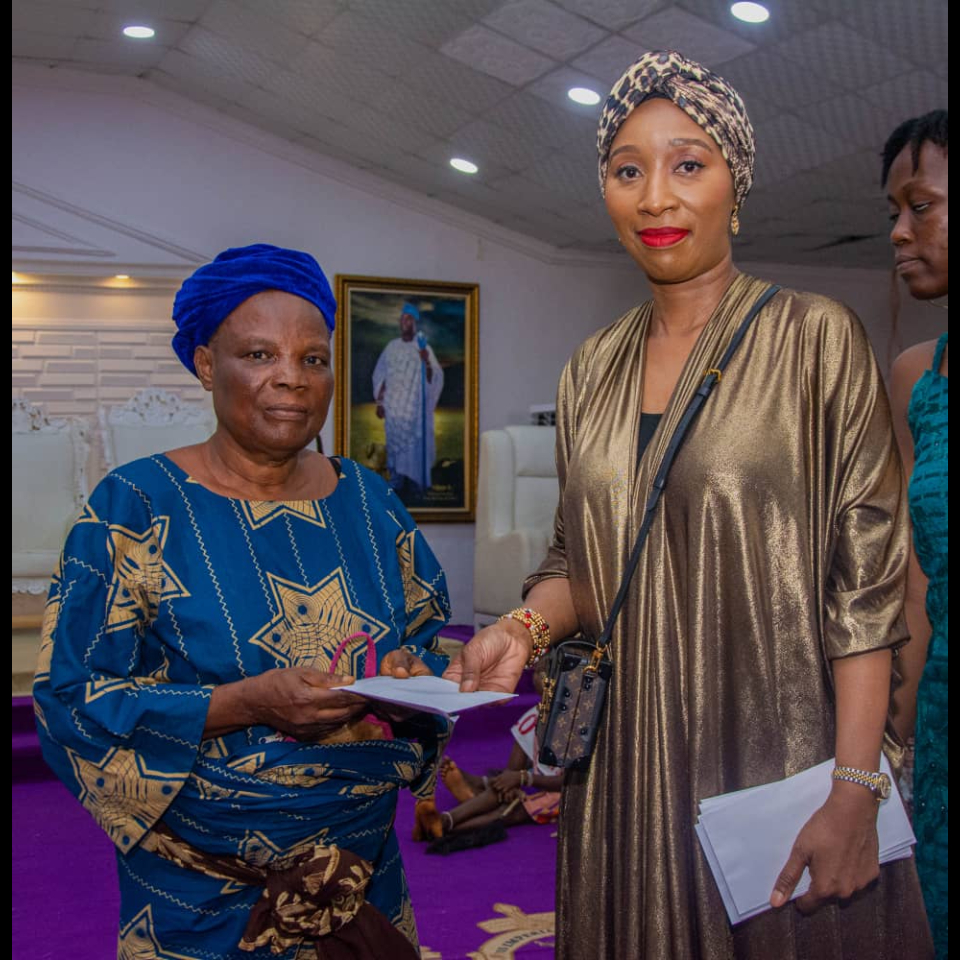 It was dancing, singing and jubilation galore at Enuwa Palace, Ile-Ife on the 7th December, 2020, when the Queen Moremi Ajasoro, QMA initiative, under the headship of Princess Ronke Ademiluyi, the Moremi Global Ambassador put smiles on the faces of up to 250 women. The women were presented with empowerment grant courtesy the  former  first lady of Ogun state and Yeye Moremi of the source, Olufunso Amosun, as part of the activities  to commemorate the fifth coronation anniversary of  Ooni of Ile-Ife, Oba Enitan Adeyeye Babatunde Ogunwusi.

The august occasion was graced by Ile-Ife monarchs, chiefs and dignitaries from all walks of life. The event kicked up at about 2pm at the conference hall with an opening speech from  Chairman of the planning committee of the Ooni’s fifth coronation anniversary, Hon. Sola Lawal. Lawal in his short speech paid tribute to the Ooni and also thanked Amosun for her magnanimity in making Ife women happy and helping to cushion the effects of the Covid-19 pandemic on their businesses.

He also showered praises on the Moremi Global Ambassador, Princess Ronke Ademiluyi for her relentless efforts in putting Ile-Ife on the global map through various initiatives over the years, including female empowerment programme as well as the crusade against rape, human trafficking and gender based violence. Ademiluyi while unveiling the Yeye Moremi Olufunso Amosun Grant for the year 2020, showered encomiums on Ooni of Ile-Ife for his continuous fatherly support to  the QMA Initiative over the years.

She also expressed gratitude to HE Yeye Amosun for her consistent support to the Moremi family. She equally thanked the people of Ile-Ife for their love and support to the various activities of the QMA initiative, while assuring them that the grant is just a tip of the iceberg as plans are afoot to establish a Queen Moremi Microfinance Bank, meant to take care of  the business needs of women which constitutes her primary constituency.

According to her, the move is feasible as studies have shown that women are better at payment of debts and are more committed to honoring  financial commitments. The first set of awardees were ten surviving victims of human trafficking from Lebanon and Oman, led by their chaperon, Mrs. Ann Okeleke of the Rebirth Hub Africa, an international organisation committed to the campaign against human trafficking and rehabilitation of its victims. The organisation is led by Ms Omotola Fawunmi, an indigene of Osun State based in the USA.

The awardees took turns in regaling the audience of their bitter experiences as slaves in these said countries and were full of thanks and praises to the Ooni,Yeye  Amosun and Princess Ademiluyi for the  opportunity given to them to start  lives afresh and be reintegrated back to the society. The chaperon in her vote of thanks on behalf of the awardees, also thanked all the principalities in like manner.

Following in quick succession were 60 Ile-Ife market women and also ten (10) shortlisted Ile-Ife young women entrepreneurs with feasible and already verified business proposals. Added to these are 45 palace female junior workers who also expressed their utmost delight for the gesture through the QMA Initiative. However, the icing on the cake was the empowerment of 80 members of the Queen Moremi Ajasoro indigenous family, called the Yekeres, led by the Owa Yekere, Chief Oluwagbemileke Obisanya who was full of thanks and praises to the benefactors.

The memorable occasion, spiced by various cultural performances by Ojaja Cultural Troupe, Oshirigi Dancers and Ojo Ola Traditional Troupe was brought to a joyous end by the C.E.O of The House of Oduduwa foundation, Otunba Jide Fadairo who represented the Ooni of lle lfe.

He showered praises on the Ooni in his vote of thanks and also thanked HE, Yeye Amosun for the grant support to  about  250)women, despite the economic crunch occasioned by the Covid 19 pandemic. Fadairo also thanked Princess Ronke Ademiluyi on behalf of His Imperial Majesty and Ile Ife people for her avowed commitment to the growth and development of Ile Ife and the Yoruba nation at large.